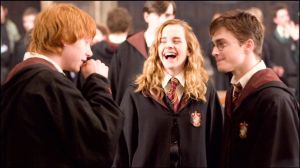 I do not own to the rights to these characters, this is meant as a bit of fun. I know I said I would start this about a month ago, it took longer to start than I thought it would. I have decided to posts on what charges the characters of Harry Potter would face if they went to our courts.

Judge: Mr Vernon Dursley and Mrs Petunia Dursley. This is a preliminary hearing for offenses carried out by you both against one Mr Harry Potter. Today we are only concerned with crimes committed during his first year at school.

Vernon: Turning red. We gave him a home and food out the kindness of our hearts, we even gave him clothes, he is our … chokes on the word … family.

Judge: Raising voice. You are charged with child abuse on Mr Harry Potter for making him sleep under the stairs for eleven years and only giving him a bedroom when Mr Dumbledore found out where he was sleeping. You even locked him in his so-called room under the stairs at times and did not give him dinner. What do you say to these charges?

Petunia: Paled and let out a loud gasp at the allegations.

Vernon: Somehow managed to get redder, almost purple now. It was a roof over his head, we did not ask for him to live with us, we did the best we could with such a boy. He is a menace.

Judge: You are also accused of a abandoning your nephew , Mr Potter, at a busy railway station, King’s Cross, when you were sure he did not have a way to get to his school, when he was just eleven years old.

Vernon: His school and of his and their ways, they would make sure he got there. Lowering his voice. We just expected him to have to wait a few hours, what’s wrong with that?

Judge: Settle down. Not believing the size of Hagrid. Turning back to the Dursleys. Do you deny you made Mr Potter under the stairs?

Judge: Raising his voice to be heard over Vernon’s spluttering. Do you deny that you left your nephew on a crowded platform, lost at age eleven, to fend for himself?

Judge: Since we have evidence from Mr Potter and these are special circumstances. Mr Potter does not want any charges brought, we feel you still need to do something. The people at Hogwarts school, say you can do community service there each weekend for three months, to clean up after a … er… recent disturbance.

Hagrid: Turning to Harry. We will show ’em what hard work is.

Want to read more crimes for the Harry Potter world? Look out for more in the coming weeks from characters like Hargrid and Harry, who will be sentenced soon.