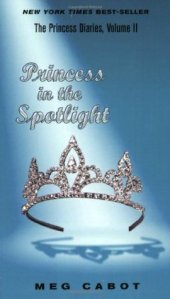 No one ever said being a princess was easy.

Just when Mia thought she had the whole princess thing under control, things get out of hand, fast. First there’s an unexpected announcement from her mother. Then Grandmère arranges a national primetime interview for the brand-new crown princess of Genovia. On top of that, intriguing, exasperating letters from a secret admirer begin to arrive.

Before she even has the chance to wonder who those letters are from, Mia is swept up in a whirlwind of royal intrigue the likes of which hasn’t been seen since volume I of The Princess Diaries.

This one was nothing like the film, which made me enjoy it more. The familiar characters were all back and up to their old tricks. Lilly was still being a pain and quite a bad friend. Michael was still being vague and not owning up to his feelings for Mia until someone else showed their feelings for her. But he is a much better friend to her than his sister is. I actually think I would prefer it if Lilly wasn’t such a close friend. I didn’t really like her in the films either.
I haven’t felt that Mia has grown much yet but I am hoping over the next few books she will. I also want to see her get together with Michael, he seems like such a nice person and would be good for her.

Looking forward to the next one very much.