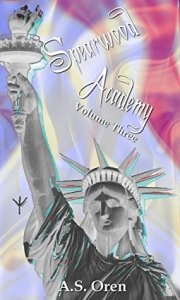 In Volume Three , Avalon and the Boys escape to New York to try and cure her of her problem. Will the Sea Witch be able to help, or will more problems come up?

Okay so another great book in the series. Another cliffhanger ending making me buy the next one straight away. Who will she end up with? It’s going to be with one of those boys, we can rule out Amr and from the last page we can rule out Triton. I do not want it to Paden or Bullock. I am hoping for Dante. Not sure why but I think they would make a great couple, they have the fun teasing between them and she has admitted that he is good looking. I can hope right?

Triton, where to begin, I should have realised he would do this, look at where she first met him and he wasn’t originally in their group, he seemed to tag along. But why then would Roseman make her think she hates him? Hmmm, hopefully all will be revealed soon.

Also what’s up with her powers? Can she use them all? Or just most of them? Why are the ancients planning a war. There’s just too many questions. I have to get reading the next one.