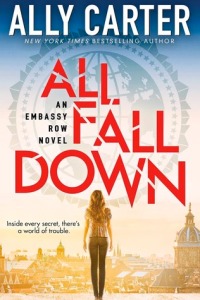 This exciting new series from NEW YORK TIMES bestselling author Ally Carter focuses on Grace, who can best be described as a daredevil, an Army brat, and a rebel. She is also the only granddaughter of perhaps the most powerful ambassador in the world, and Grace has spent every summer of her childhood running across the roofs of Embassy Row.

Now, at age sixteen, she’s come back to stay–in order to solve the mystery of her mother’s death. In the process, she uncovers an international conspiracy of unsettling proportions, and must choose her friends and watch her foes carefully if she and the world are to be saved.

I have been reading a lot of Ally Carter lately and really enjoying it. This book was no exception, it was fun, maybe a little similar to the two other series I have started by this author but not enough to put me off.

I liked Grace she was a great main character, with everything that had happened she was so sure of herself. It was nice to see her making friends, and they had confidence in her, even when she didn’t.

The idea of Embassy road was really clever, it was a good way for the characters to interact. The county it was in confused me a little because it’s not a country it’s a region in Italy, unless the author knows more than I do.

The ending was amazing, did not see it coming at all. There was plenty of scenarios as to what could happen running through my head but I never even got close to what happened.

I am looking forward to the next one in the series. I hope Alexei is in it again.