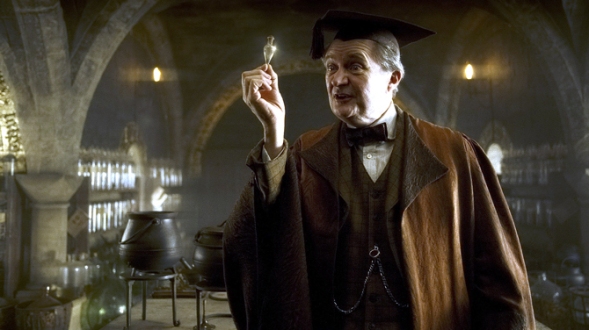 Having just finished the sixth book for the umpteenth (possibly millionth) time, (I really do love this series). At a certain point I was left wondering about a certain aspect of the book.  Please do not read farther if you have not yet watched the sixth film or read the sixth book.

As we all know in the beginning of the sixth book Professor Slughorn gives the potion Felix Felicis as a prize for the best draught of living death. And of course Harry wins. Well later in this book Harry, Hermione and Ron look up this potion to see if they could brew some for their selves. They find out it takes sixth months to brew. Since Slughorn only agreed to come back to Hogwarts, at most 6weeks before this class he would not have had time to brew any. This leads me to the question does he then carry some around? He admitted he only taken some twice in his life, so possibly he keeps as a memento.

Professor Slughorn is also very cautious and worried about being taken by the death eaters, so it is a possibility that he kept some in case he needed to escape them. Would be a good plan, he takes some just before he is captured and the luck is on his side so he can make his getaway.

If this was the case, why did he give up his stash? Does he have more hidden away? Or does he truly feel safe in Hogwarts, that he feels confident that he will no longer need it?

Why do you think he had a small vile and then gave it away?

13 thoughts on “Did Horace Slughorn Carry Around Felix Felicis all the Time?”