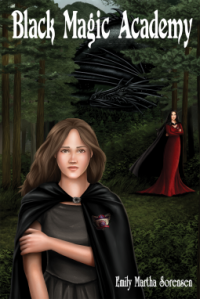 Mildred doesn’t like black magic. But her mother was once valedictorian of Black Magic Academy, so her aunts insist she needs to follow in her footsteps and become one too.

Mildred doesn’t want to be part of the popular crowd. Nor does she care about her “death-enemy.” And she certainly has no interest in murderous spells. But if the teachers catch on that she’s actually a good witch . . . well, they don’t react well to that kind of ignominy.

What’s the only good witch in a school of wicked witches to do?

I received a free copy of this book via Netgalley in exchange for an honest review.

This book started out strong, but then soon fell a little short for me. It didn’t feel polished, had a lot of grammatical errors and felt rushed, more like the first draft of a book. With some work this book could be amazing. But as it is, it was really rushed and could do with some more explanations at points.

The characters were good but at times I was getting confused between some of them, especially Mildred’s Aunts.

The story switched to what felt like an entirely different story with a few of the same characters, and it happened really quickly.

I possibly would read the second book in this series if I came across it but I won’t go seeking it out.