Seventeen-year-old Keralie Corrington may seem harmless, but in fact, she’s one of Quadara’s most skilled thieves and a liar. Varin, on the other hand, is an honest, upstanding citizen of Quadara’s most enlightened region, Eonia. Varin runs afoul of Keralie when she steals a package from him, putting his life in danger. When Varin attempts to retrieve the package, he and Keralie find themselves entangled in a conspiracy that leaves all four of Quadara’s queens dead.

With no other choices and on the run from Keralie’s former employer, the two decide to join forces, endeavoring to discover who has killed the queens and save their own lives in the process. When their reluctant partnership blooms into a tenuous romance, they must overcome their own dark secrets in hopes of a future together that seemed impossible just days before. But first they have to stay alive and untangle the secrets behind the nation’s four dead queens.

I recieved a free sample from Netgalley for review but I ended up buying it to review the whole book.

In the beginning I was not sure what to make of it. I loved Kerilie and her story, it immediately grabbed me. But the queens side of the story was a little flat for me, at first. As it got going I fell in love and wanted to know all their secrets. I liked how we got to know the queens although the time line confused me a little. It was never explained the difference in the timeline, I did work it as I got to the end but it was a little confused, a little more organisation in that respect would have been better for me.

Keralie was an amazing character, she was strong and fun and I loved how she looked at the world. The setting was great and I loved the different perspectives. It reminded me a little of Divergent but without the choices. We only got to see a few of the quadrents it would have been nice to see more but I don’t think it detracted from the book at all.

The mystery, that had me guessing and gasping at reveals right up to the end. It’s not something I feel that could have been guessed at, but since it’s fantasy I can forgive it, it was so clever and a really interesting idea.

I will be reading more of this author especially if she delves back into this world. 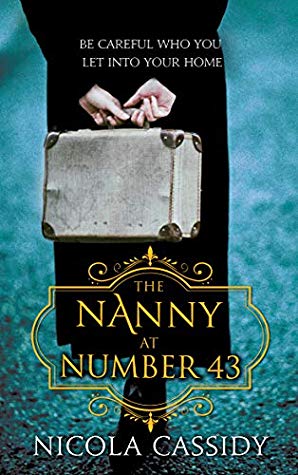 Be Careful Who You Let Into Your Home

Wanted, a respectable woman to care for a motherless child.

When William D. Thomas’s wife dies in childbirth, he places an advertisement in his local newspaper seeking a nanny for his newborn child.

He is thankful when an experienced nanny arrives at 43 Laurence Street and takes over from his frazzled housekeeper Mrs McHugh.

Mrs McHugh confides in her bedridden friend Betty, who has a bird’s-eye view of all the happenings on Laurence Street, that the Nanny is not all she seems. Betty begins her own investigation into the mysterious woman.

When the bodies of twin babies are discovered buried in a back garden, by a family who have moved from their tenement home into a country cottage, a police investigation begins.

But it is Betty who holds the key to discovering who the Nanny really is … and the reason she came to 43 Laurence Street.

I recieved a free copy of this book via booksirens in exchange for honest review.

I felt this book was a little slow to get getting, but that doesn’t mean it’s a bad thing. It just adds to the suspense, but for me personally it was a little slow. The secrets were revealed in a slow manner.

Since there was at least three time-lines and mutiple POV’s I would have preferred a reference to where and when the chapter was taking place. I got a little confused at times. Especially when there were characters with the same name. I also got a little confused with characters. I felt that all the stories were sometimes a little un-needed or not explained until a lot later in the book, when I had forgotten a lot of it.

The characters were good but sometimes a little niave, deaths were not really given much thought other than to grieve. I know it’s set in the 1800’s so different times but it just seemed a little easy to  me.

I knew there was something up from the beginning but not sure what, I didn’t feel the big reveal was quite shocking enough, yes it was horrific but I had worked it out quite early on. One death was unexplained, not sure if it was connected or just an illness, wish that was explained.

Overall it was a decent book, with mystery but a  little slow for me.